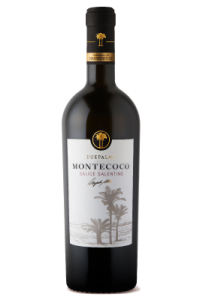 Certainly the best-known DOP in the Salento region and symbol of the revival of Apulian winemaking, Salice Salentino is the classic expression of the region with its ancient Romano Greek traditions, the powerful ochre red clay soils and the ever sunny climate with its cooling winds from the sea. Our Montecoco wine (a district close to Cellino San Marco) is a great blend of selected ripe Negroamaro and Malvasia Nera grapes harvested in September. The wine is aged for 6 months in French oak barriques before a final maturation in bottle before release.