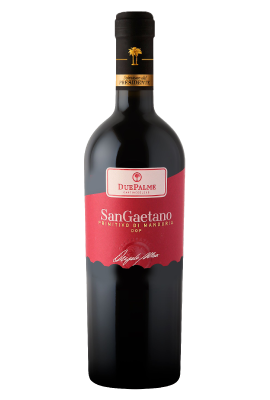 The name “SanGaetano“ captures the cooperative tradition of Cantine Due Palme which, in 2012, took over the small “SanGaetano“ Cooperative in Lizzano in order to augment the production of the winery with the Primitivo di Manduria. The soil in the region is particularly red in colour thanks to the presence of Iron Oxides with a rocky limestone substratum.
Long regarded as one of the most important and popular Apulian red wines both in Italy and abroad, Primitivo di Manduria is produced from a very careful selection of early-picked grapes harvested by hand into cases.The wine is aged for 6 months in American oak barriques to both soften and enhance the tannins followed by a period of maturation in bottle.

Today Due Palme is the leader in foreign markets all around the globe: 37 countries worldwide accounting for 12 million bottles per annum. Just like the strong and warming sun of the Puglian region the energy of Cantine due Palme has blazed a trail and lit up the way towards realizing its own dream of spreading the quality of its wines to every corner of the world.
Due Palme is the biggest winery in Puglia.
www.cantineduepalme.it