Chateau Lynch-Moussas is honored to be on the 5th Growth of the Grand Cru Classe 1855 – The Classification of Fine Wines initiated by Emperor Napoleon. Initially, the winery was owned by the Lynch family of French-Irish origin, then divided into two separate wineries: Lynch-Bages and Lynch-Moussas, where Moussas is the name of the land in which people grow high-quality vines. In 1919, the Borie Manoux family brought the Chateau Lynch-Moussas winery and today it is run by Sir Jean Casteja. Through three generations, Chateau Lynch-Moussas is constantly improving quality day by day. Especially, starting from vintage 2010, Lynch-Moussas invested more time and money, and the result is that the vintage 2019 is considered as a "historical vintage of the winery".

Located in the southwestern part of the Pauillac and Haut-Médoc subregions, Lynch-Moussas is not too far from famous wineries like Pichon Lalande, Grand Puy Lacoste and Chateau Batailley. Pauillac is in the Médoc region, on the left bank of Bordeaux, is home to some of the world's greatest wineries, including Chateau Lafite Rothschild, Chateau Latour and Chateau Mouton-Rothschild, 3 out of 5 The castle was ranked First in the Grand Cru Classe 1855.

The soil in Pauillac is mainly gravel soil, a thick surface with layers of gravel, the bottom is clay and sandstone, which absorbs water well, creating wines of the highest quality with the ability to store for a long time.

Chateau Lynch-Moussas concentrates only two grape varieties Cabernet Sauvignon (70%) and Merlot (30%) on a land rich in clay and gravel, with a vineyard area of ​​more than 62 hectares. Similar to Chateau Batailley, for more than 100 years, the winemakers at Chateau Lynch-Moussas painstakingly cultivate the soil, harvesting only grapes of the highest quality, entirely by hand, according to Chateau Batailley. pursuing the goal of creating the highest value from raw materials, while showing respect for the soil and the natural environment. The average lifespan of vines is 25 years old. The wine is aged for 16-18 months in 60% new oak casks, aged 7-9 years in the bottle before reaching its peak.

To make the most of the potential and fertility of the soil, starting in 2001, Émile and Philippe Castéja created a secondary wine to accompany Château Lynch-Moussas as “Les Hauts de Lynch” -Moussas", produced in the Haut-Médoc area and harvested from the youngest vines, planted on a small hill overlooking the castle.

Château Lynch-Moussas wines have a deep red color, intense aromas of red fruitss. The body is firm, rich, the aftertaste is long. Lynch-Moussas contains a relatively high proportion of Merlot compared to a typical Pauillac bottle, so it tends to be soft, smooth and has a taste of luxury, yet still has a generous, and unforgettable taste, especially suitable for the taste.

Chateau Lynch-Moussas is truly a jewel of the Casteja family empire - one of the most powerful families in France, joined together with Chateau Batailley, Chateau Trotte Vieille, and Domaine de l'Eglise, the "aces" cards", creating the "four pillars" of high-class castles owned by Borie-Manoux.

Chateau Lynch Moussas is now available at the WeWine stores nationwide. Visit our stores or call 1900 636 749 for best support and quick order with free delivery service. 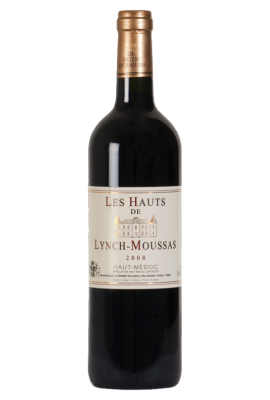